The Le Mans endurance race has been an ongoing annual event since 1923. It is considered one of the most prestigious automobile races in the world and has been called the “Grand Prix of Endurance and Efficiency.” For forty-three years, not one American constructed vehicle had won the race, but that all changed when the makers of Ferrari decided to poke a little fun at Mr. Ford.

In 1966, Circuit de la Sarthe, Le Mans, France, the first American constructed race car won the Grand Prix of Endurance. The winning car was a 7-liter V8 engine Ford GT40 MkII. But this moment in history was so much more than a race or a sports car beauty contest. This was a turning point in American car manufacturing and endurance racing, when Ford showed the world that their cars would not only finish a 24-hour race, but they would win the race!

The movie follows Shelby and Miles, who battled corporate interference, the laws of physics, and their own personal demons to build a revolutionary race car for Ford Motor Company and take on Enzo Ferrari at the 24 Hours of Le Mans in France in 1966. The trailer shows the tension between Shelby and Miles from the very beginning.

The real Ken Miles raced motorcycles before he served as a tank commander in World War II. In 1953, Miles won 14 straight victories in Sports Car Club of America racing in an MG-based special of his own design and construction. He then designed and built something known as the “Flying Shingle,” a car which beat the likes of actor James Dean in a Porsche 356 Speedster, until judges found that the “Fly Shingles” fenders were too wide. He was then disqualified, bumping James Dean up in the ranks. 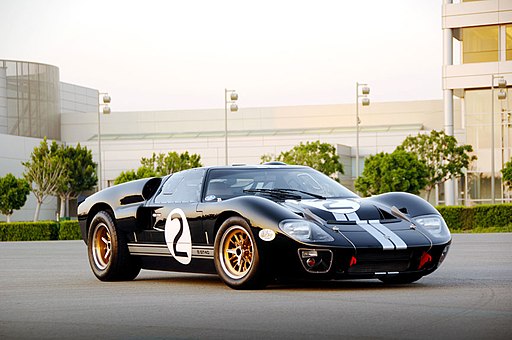 The real Carroll Shelby was the racer turned designer who helped Ford go from the typical “general” motors, to a competitor. Like Ken Miles, Shelby also served in World War II working alongside Air Corp bombardiers. Though Shelby had the spirit of a racer and participated in the late 50s, early 60s, his heart wasn’t fit enough to keep pace. Due to health issues, he hung up the helmet and became a world renowned designer. In 1964, Shelby was asked by Ford to design a vehicle that would boost their GT racing program. His team reworked the GT40, and when the cars were entered into the Le Mans races in 1966, they took first, second, and third places.

After the Ford GT40 pulled out an impressive win in this 1966 race, Ferrari never won Le Mans outright again. The last Ferarri win was in 1965 with Jochen Rindt and Masten Gregory claiming a victory in the 250LM.

The film will be released on November 15 by The Walt Disney Studios.

If they can beat the #Hawks of course👀

Let us know your predictions for tonight!