Working while the Women’s World Cup is on and the US team is playing is very tricky stuff. Thank the sweet universe for live streaming and super fast updates with audible notifications so I can alt+tab between browsers!

The US team came out strong and remained strong through the entire game. Within the first 32 minutes, three different players scored goals. Alex Morgan, Rose Lavelle, and Lindsey Horan, who was set-up for the score by none other than my fave player Tobin Heath, all found the back of the net. Heath performed her magic footwork, moving down and across the field like a wizard. These women make it clear why the rest of the world calls the sport “football” instead of soccer.

There were a few bad calls or non-calls, it truly looked like the referee was okay with the US team getting knocked around a bit. Little did they know, it would only fuel their fire. It really looked like a fourth goal may have made it into the net right before the 45-minute halftime, but Thailand put up a great defensive wall at just the right time.

Taking a break from this update during halftime. Hoping to see Carli Lloyd play during the second half. If any of you were on Twitter while the game was happening, you may have seen these kids react to the first goal. It’s pretty epic.

That moment when #USWNT scores their first goal of the World Cup #OneNationOneTeam pic.twitter.com/x2Br3J6fxW

The second half had a moment in which I thought we’d switched sports. Is this wrestling!? What just happened with Julie Ertz? That was an all out wrestling match, and she STILL kept possession of the ball. Beasting it! Then Samantha Mewis comes in to the left of the net and kicks in the first goal of the second half! OMG, Alex Morgan for her second goal of the game! USA up 5-0 and there’s still 36 minutes left of the game!

Are you seeing Tobin Heath tearing up the field, I’m having such a girl crush moment!

Should I feel bad for Thailand? I mean, whenever my brother played baseball growing up and a team would get crushed I always kind of felt bad. Thinking to myself, does the World Cup need some kind of mercy rule? No, nah, this is a feeling of sheer joy and pride in my home team.

With the team now leading 7-0, Rose Lavelle (who scored two of those seven) has left the game, making room for Carli Lloyd to run out. She received quite an applause after recently sharing that some people think she’s too old for the game. At the ripe age of 36-years-old, almost 37 since her birthday is mid-July, Lloyd is proof that passion for the game trumps age in this sport.

Dang. 72 minutes in and Thailand is looking kind of angry. Taneekarn Dangda is on the board with a yellow card. For those of you not sure what that means, a yellow card is used to caution players after misconduct in a game. If the player needs to be disciplined again, they will get a red card which would be grounds for dismissal. Truly it was never uphill for Thailand, but this yellow card definitely sped up the downhill spiral.

Alicia Keys Knows, This Girl is On Fire

The lyrics are escaping me while I try to keep up with this game. Something about, “You can try but you’ll never forget her name, she’s on top of the world.” Singing about Alex Morgan right now! Seventy-four minutes into the game and she’s kicked in her THIRD GOAL! Oh, it doesn’t stop there, no my friends, it keeps going. It’s like that song that never ends. This US women’s soccer team is literally kicking ass! With another back-to-back-to-back trifecta of goals!

Oh stop it, at this point the entire process of trying to keep up with the game with a post that shows my reactions is nearly impossible to do. Alex Morgan just kicked in her 5th goal of the game. That’s right, FIFTH GOAL OF THE GAME, how does this even happen? She is legendary. Her 5th goal of the game led to the 2019 US Women’s Soccer Team setting a new world-record for largest margin of victory. The previous record had been placed by Germany 11, Argentina 0 in 2007. Of course the US team didn’t stop at 12, because Carli Lloyd’s feet got a hold of the ball and she scored goal number 13 for the team!

Nothing short of legendary

There is not a doubt in my mind that the US will be bring the Cup home this year. So proud of these women! I can’t even begin to know what kind of strength, endurance, and sheer will power it takes to be out there on that field. Amazing, simply amazing! US wins over Thailand with a score of 13 to 0. 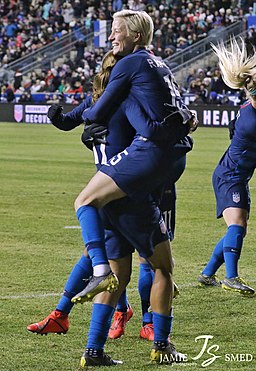 Goals were kicked by:

N.L. East Weekly Review 2022: Acuña Jr. is the Spark in Return to site of Injury

Eflin set a new career-high in strikeouts against L.A. on Sunday. What was the major contributor factor to his success?

The Mets win but lose Scherzer, Acuña returns to site of his injury, and the Phillies don't capitalize on West Coast trip.

Who will return to the Philadelphia Union?

Jakob Glesnes and the state of Norwegian soccer