About five years ago, my son Finnegan decided he wanted to play soccer. He was five years old, what did he know about soccer? I was a swimmer in school, so I certainly wouldn’t be helpful. However, I did what any parent should do, and I signed him up at the YMCA. This is when we learned that my very best Finn does not like the feel of grass, nor does he like when the soccer ball is wet due to the morning dew. At his young age, he was far more interested in sitting on the soccer ball than kicking and running after it. Fast forward to 2019 where you will find soccer balls and basketballs knocking around pinball style in the back of my car. Finn now loves to play pretty much every sport under the sun. This makes me happy, because he has gotten his little sister to be even more sporty, and she is a firecracker of activity!

We have family friends who are SUPER into soccer. We go to their son’s games when he plays for the high school team. My daughter, she’s 6, gets really into watching the games. She is a screamer and usually the first to get a chant started in the stands. So I have been excited to see her reaction to the 2019 FIFA Women’s World Cup (WWC). This year, the WWC is taking place in France and started on June 7, 2019. The games will continue throughout the 7th of July. Twenty-four different nations are participating this year in what many call “the beautiful game.”

Soccer fans know, the United States is the most decorated national team in Women’s World Cup history and also the defending champions. Jill Ellis is still the team’s coach, and those of you who watch the sport will recognize her name because yes, she won the FIFA Women’s Coach of the Year back in 2015. However, this year there has been a tad bit of controversy surrounding Coach Ellis as one of her former players spoke poorly of her leadership qualities in a recent interview. That player is none other than Hope Solo. We kind of care what she says, because, well, she is a two-time Olympic gold medalist and was on the 2015 Women’s World Cup soccer team when they won it all. Sadly, she did end up suspended, and ultimately cut, from the team after saying some choice things about her opponents. Sounds like not much has changed on that front. Who knows, maybe this will light a fire under Coach Ellis, and we’ll see her show extra drive when pushing her players.

Who are we looking to watch this year as the women defend their Cup? Most will mention the team captain, Alex Morgan, but I’m going to say keep your eye on Tobin Heath @TobinHeath. The 2019 US Women’s World Cup team is top notch, with many returning veterans. The reason Tobin is my favorite is because she’s a soccer wizard. Seriously, you know how when you watch people play billiards and they make shots which can only be classified as magic? It’s not magic, it’s strategy and math, and Tobin’s brain must look like the matrix when she’s on the field.

Tobin is a player on the Portland Thorns FC of the National Women’s Soccer League. She’s their “forward” which means (for those of you who may be new to the sport) you’ll find her closest to the opponent’s goal during the game. Trust me when I say that she is super talented and quick on her feet. Perhaps more importantly than that is that she isn’t all about being the person to score the goal as long as the ball winds up in the net. Heath is happy to be part of a counterattack play.

Interestingly enough, Tobin Heath is also one of four women soccer players who has crafted a fashion line that is designed to be gender-neutral. Heath is a co-founder, along with Megan Rapinoe, Christen Press, and Meghan Klingenberg. Rapinoe and Press are also members of the 2019 US Women’s World Cup team. Klingenberg was back in 2015 when the team won the cup in Canada. These women wanted a way to celebrate their win in a meaningful way, and the brand called Re-Inc was their way to do just that. The clothing line has a one-stop-shop sizing chart for all, ranging from extra extra small to extra extra large. This clothing line is meant to bring light, in part, to the pay equity dispute between women’s and men’s soccer, seeing as how the winning men’s soccer team earns a significant more amount of money than the women’s. “This year, the prize money gap between men’s and women’s championship teams is $34 million.” (Source: CNBC) The first launch of t-shirts from the Re-Inc line will say, “liberté, égalité, defendez.” Loosely translated, it means “liberty, equality, defend.” 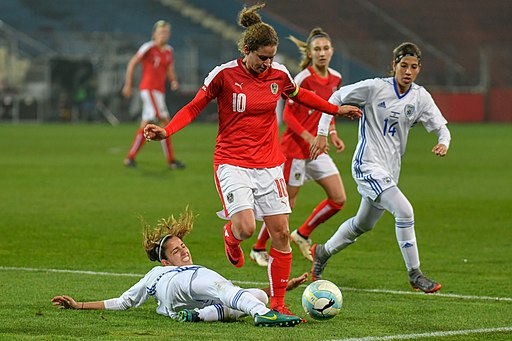 To highlight the most empowering Women’s World Cup moments, Nike has taken it upon themselves to let viewers know to “Dream Further.” I’m not sure what that means, and I think they need to hire the TPL editor as a consultant. If I were the lead on their marketing campaign, I would have said, “Dream and then Dream BIGGER.” Oh yeah! That sounds sweet and would go perfectly with a highlight reel of the top players kicking arse on screen.

Like in this photo from the 2017 cup when Austria was playing against Israel. She’s sliding under the feet of her opponent like “Go ahead, break my ankle, but you’re not gonna get that ball!”

Their video promotion for “Dream Further” is stellar, and I will say I found it to be touching. So I’ll give them that. The young girl in the gray uniform has a priceless face of anxiety and determination throughout the three-minute commercial, and I feel like many young women can relate to it while out on the field.

Those of you cheering on the home team here in the US (high fives to you, because we’re favored to win it all), their first game will be versus Thailand on Tuesday, June 11 at 3 p.m. ET. Followed up on June 16 against Chile and June 20 against Sweden.

Paul Reed: Getting It Out The Mud

#BlueCoats Isaiah Joe with the AND-1 JAM from the inbound pass.

#BlueCoats Justin Robinson has 12 PTS and 9 ASTs after hitting this SNATCH-BACK jumper!

Brenden Aaronson and Mark McKenzie, young stars of the Union and...