Today, Super Bowl Sunday, is a big day in advertising, and lucky for us, USA Today’s Ad Meter tracks the effectiveness of each year’s advertisements. But those are effectiveness according to that year, so it only made sense to figure out if their metrics still hold up.

This is USA Today’s most recent list of top ads since 1989 – don’t worry, I watched them all and attempted to score if they’re still memorable.

Of the 31 commercials in their list (2011 was a tie), Anheuser-Busch InBev and Pepsi Co. were the big winners – so clearly this is their Big Day, just like it will be for the Rams and Patriots: 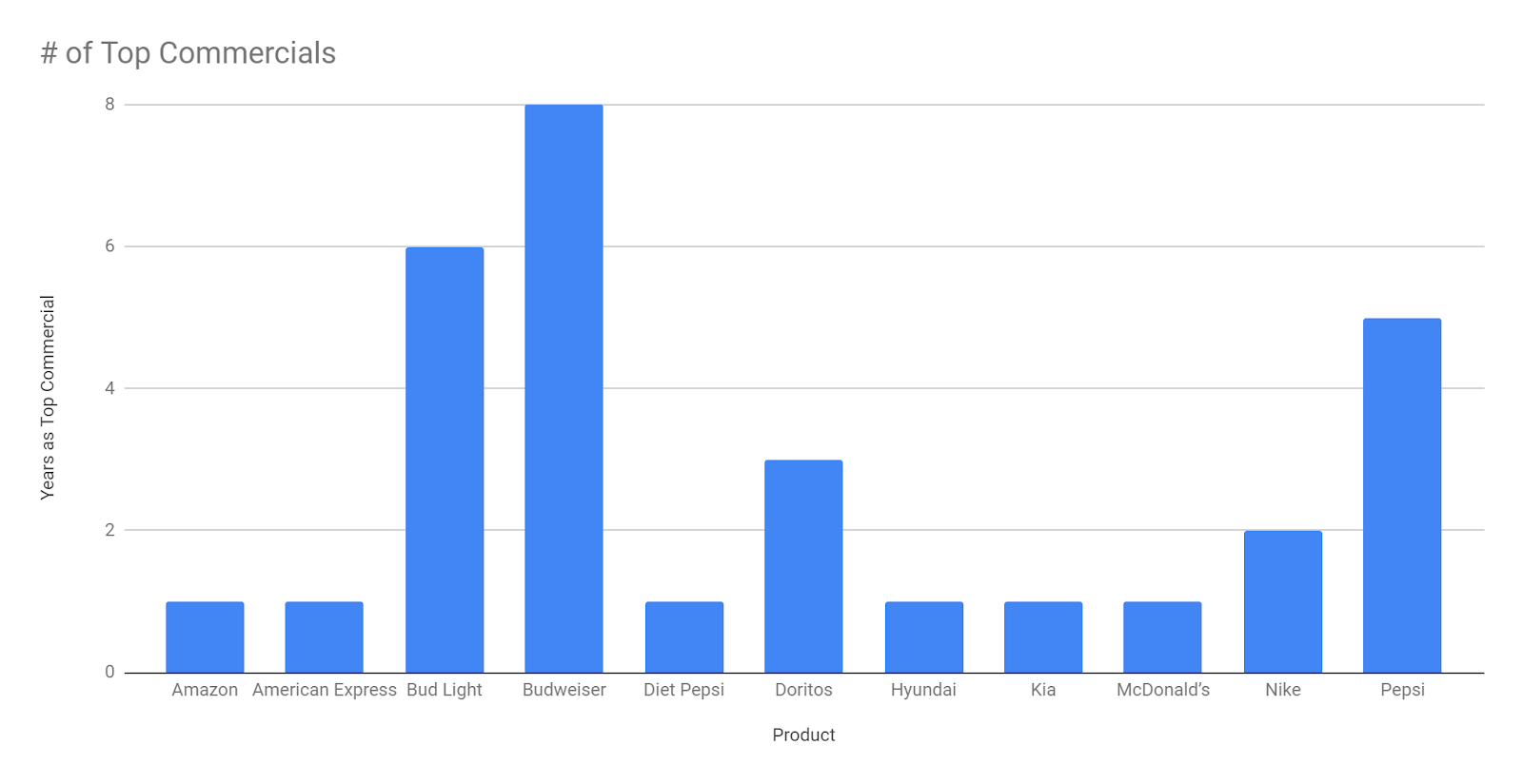 But are these the most memorable commercials now?

There will be some recency bias for commercials like Amazon’s new Alexa Voices from Super Bowl LII, but what about Jordan and Bird’s game of H-O-R-S-E for a Big Mac? Does that still resonate with consumers? Taking a look over the list, I gave a positive score to any commercial I recognized just from the description, a neutral score if I remembered it after a watch, and a negative score if I still didn’t remember the commercial after a watch. This left me with a few commercials from the 90’s that will last forever and even a few food commercials from the 00’s:

Not surprisingly, there were ads with high Ad Meter Ratings but were forgettable – here’s one example that I just don’t remember even after watching the clip:

I understand it was 15 years ago, but this was the 2004 game…which happened to have a certain Timberlake/Jackson Halftime Show. And no one has forgotten that!

Now, there were also commercials that I still remember that didn’t make the top in their Ad Meter. Of those, only four are worth talking about:

This was iconic in the 90s, I even think it got spoofed in movies. Then again, maybe as a male. I never forget a super model.

While the commercial and fandom was quite annoying, hard to argue the impact it had for Budweiser.

AT&T’s “Tape a Cheetah to her Back”

I still quote this to my friends, it put Beck Bennett on the map, and those kids were just so darn cute. It had tough competition in 2013, since the Budweiser Horse Trainer ad was full of feelings.

So what say you? Do you agree?

Was I too harsh or not critical enough? What are some other commercials you thought should be on the list? Add them in the comments, we look forward to reading about it!

Should the Eagles Draft a QB?

Most Underrated Superhero Films of All Time