Before we dive into this week’s new episode of Riverdale, I think it is important that I quickly share my thoughts on our emotional well-being. This historical perspective on mental health treatment is interesting. Though I would like to preface by stating I do not like the term “mental health.” I say brain health because mental health doesn’t really explain the issue. Our brains should be treated no differently than we treat our hearts. We don’t say love illness or love health, so why say mental illness or mental health? It is brain health, just as it is heart health.

Mental wellness should be considered annually, just as physical wellness is for kids. Young kids suffer from anxiety and depression, it is sad to think about a kid dealing with any type of mental illness, but ignoring the issue only exacerbates the problem. If your child had a heart condition you would not ignore it, you would seek treatment.

I’ve been watching you

Finally, the “watcher in the burbs” is back, recording hours upon hours of recordings. Only this time the recordings make it seem as though the camera(wo)man is closer to the houses while recording their front doors. What do they mean? Why are they being circulated?

College applications have gone out and now it is time for acceptance letters, or sadly for Betty, a rejection letter from Yale.

Next thing we know, Betty and her mom are both at the high school. Wow, Betty rips into her mom during a school psychologist session. Pretty sure this was supposed to be about Yale, but it just became something that should probably be reported to social services. Betty’s mom explains that Betty growing up, going to college, and moving on is just too much for her to bear. “I love you” is not an apology my friends, nope, being a controlling possessive crazy person is not an excuse. And come on people, you can’t love one of your children more than the others. That is pretty much every insecure child’s worst nightmare! Goodness, Mrs. Cooper-Smith, get ahold of yourself.

Superhero fantasies in the trash

Archie is caught falling asleep in class. He is sent to see Mrs. Burble, too. She wants to know why he isn’t applying to colleges. He lets her know that he needs to step up and help the town, just like his dad would have done. She notices the cuts and bruises on his hands. He fills her in on his vigilante ways. He says he is a big comic fan, he identifies with them. Mrs. Burble stands up and says, “Are you having fantasies about being one of these comic book heroes?” Goodness. Who is this Burble woman and where did she come from?

“You talking to me like I’m a moron makes me angry.” Archie shares in an emotional outpouring, how he feels like he is failing in protecting the town because he is putting his loved ones in the crosshairs. This woman then says, “the behavior you are discussing sounds like an addiction.” What? How is that an appropriate response to him crying? I think she means well, but I’m not sure what was the way to say it. So, when Archie takes all of that and then decides he should move out of his house and into the community center, I’m not surprised. He wants to protect his Mom from anger.

So what about my precious Vixens, can I keep them? 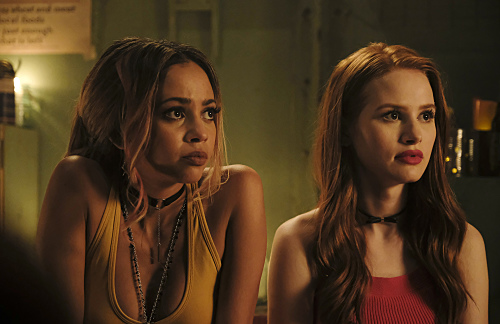 Holy Mackenzie. Principal Honey is trying to take the cheerleading team away from her. Oy vey. Cheryl lets Mrs. Burble know that she has a 4.0 GPA, an amazing girlfriend and a great head of hair. Mrs. Burble says that Cheryl has endured lifetimes of trauma and that she is remarkably resilient. “How have you been coping?” She tells Mrs. Burble that she goes into the chapel and speaks with her dead brother. She thinks he answers her back and she admits that she feels she might be losing her mind. She wonders if she has always been fractured. It actually breaks my heart to hear her speak about her life. Mrs. Burble says she is being haunted by grief, not ghosts. She talks about the Julian doll that keeps coming back into Thistlehouse to haunt her… and Mrs. Burble says “what sounds most logical, that an angry fetus is haunting you in a doll or that a human is moving the doll around in her house?”

But then. Mrs. Burble takes the cheerleading coach job away from Cheryl. And now. She will most definitely break down.

Veronica gets a phone call from Dean Kingsley at Harvard letting her know that she got in, but then he tells her to thank her father for the rum. WHAT!? Why would the Dean tell her that, it completely pulls the rug out of from under what should have been a supremely happy moment? Mrs. Burble says she senses animosity in Veronica, then goes on to say that Veronica’s connection goes far beyond that of a typical father and daughter bond. Calls it primal. Eck. What the heck is she talking about? But the kicker at the end of this session is the advice she bestows.

“He’s trolling you, so why not ghost him?”

Veronica, you should go to Harvard, you got in and you can prove yourself to yourself. Just do it. If your father bought your way in with bribes of rum we may never know, but the rum will run dry while you will continue to flourish.

An ascot will not steal my family’s accomplishments

Jughead Jones is squandering opportunity again. Goodness. So he’s talking to Mrs. Burble at his previous high school. She said she heard about his teacher committing suicide. Then he delves into the Baxter Brothers and DuPont stealing the franchise out from under him. Oh Jughead you have a persecution complex, well at least that is what Mrs. Burble thinks. She is super quick to diagnose. “Fulfil their expectations that you are a bum, then you can tell them that they never gave you a chance.” It takes her 60-seconds to break Jughead. He admits she is right and then says that he is selfish. She says not to fall back on conjecture or righteous anger, rather do the work.

Then he grabs all her candy, with her permission, and goes home to hug his Dad. Swoon.

Betty comes home and finds a check from her mother, which I suppose is meant to be an apology. Her response, “I love you most, too, Mom.”

Archie gets his first phone call on the hotline he created to catch bad guys. A young boy calls in and says that he thinks someone at the end of his hall is hitting his mom. Archie runs off.

Cheryl is 100% Cheryl. She is not crazy or haunted, she did not absorb Julian. She is now ready to unleash a wrath upon whoever is trying to make her believe she is mad.

Veronica turned down her acceptance to Harvard. She says she will look better in Yale blue. She said if she walked into Harvard she would be letting her father dictate the rest of her life. Now way, Daddy! You don’t get to own her future. Walk away Veronica, walk away from the twisted Greek tragedy. She says she is going to take her Dad on head to head and destroy him, on the business battlefield. Damn girl.

Betty reads up on Jughead’s ghostwriting attempt for the next Baxter Brothers book. She loves it. He thanks her and then he lets her know that he is onto something big regarding the previous ghostwriters.

The episode ends with Betty, Archie and Veronica lined up in a police station, once again being accused of Jughead’s murder. And the confusion continues, with very little in the way of answers.

The Falcon and The Winter Soldier Preview