Hungry and homeless kids in Riverdale come out at night working for Dodger. How do you save a town? 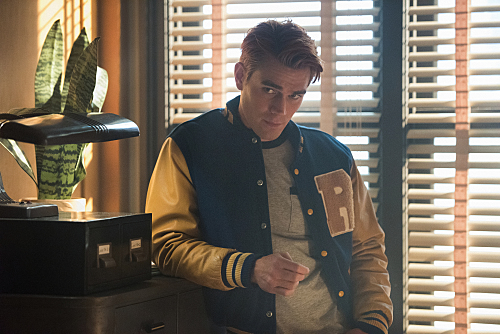 Archie vows to help one kid at a time. One less kid for Dodger. The community center gets trashed. Archie knows it was Dodger and tries to get “FP,” Mr. Jones, to help out. But when the officers ransack the arcade Dodger runs, they can’t find anything to charge him. Archie asks the kids who help Dodger why they do it. He says the community center needs to be another option.

Betty still thinks her brother is a serial killer. Betty goes to see Chic in prison, as she’s following a hunch. She asks if Chic lived with Charles, and he confirms that they were together. Chic also lets Betty know that Charles stabbed a guy to deal in the hostile. Betty hooks Charlie up to a lie detector. He’s either a great liar or he didn’t kill the dude. When she asks if he is hiding anything, the detector spikes. He shares that he is a recovering addict, that’s his big secret. Not gonna lie folks, I’m still not buying it, that does not explain why he hid in a van outside of her house and listened in on her conversation with Jughead.

Veronica’s dad lets her know that Hermosa is her only secret sibling. He shares that now that he is out of jail, he wants to delve into his passion. What might that passion be? Apparently, it is rum. Ok. I’d prefer tequila, but I’ll take some rum.

It appears we have struck a nerve

Jughead has a case of writer’s block and calls his anchor, Betty. They meet up at Pop’s.

Jughead meets with Mr. DuPont and confronts him about the first book in the Baxter Brothers series. He says he doesn’t think Mr. DuPont wrote it, but that instead his grandfather wrote it. Mr. DuPont then tells Jughead that he is a bottom feeder who is given an inch and then attempts to take a mile. He threatens to have Jughead expelled.

Jughead seeks the help of his teacher Mr. Chipping. They agree that it appears Jughead’s grandfather wrote the first of the Baxter Brother books. Later in the episode, Mr. Chipping literally jumps out of a window at Stonewall Prep after telling Jughead that he can’t help him.

Mr. Lodge pays Archie a visit at the community center. He says that he wants to pay his respects and offer sympathies for his loss. He then offers a blank check which Archie turns down. Following that, he pays Hermione a visit, threatening her life while undressing and trying to seduce her. Apparently, ordering hits against each other is their form of foreplay. Eck. Veronica is not at all happy about this; she does not want her father back at the house, he is a murderer. Her dad spins it to be about Hermosa and says Veronica is just jealous of her half-sister.

Cheryl has a bad dream. She wakes up to see the doll looking at her. She then refuses to go to school because she is afraid to leave Nana Rose and the twins at home with the creepy doll. So, she puts a circle of salt around the doll. Because, as we learned in Hocus Pocus, salt keeps evil away. Unfortunately, it doesn’t seem to have been enough, because while Cheryl is at school, Dagwood chokes on a ping pong ball. Aunt Cricket and Uncle Bedford show up unannounced and Cheryl passes out.

Cheryl uses big words often, like Phantasmagoria. I enjoy that one. She thinks she had a bad dream, but then she realizes it all did happen. She puts the creepy doll in a bathtub, held down by a brick, and tells the spirit to drown.

So why did Aunt Cricket and Uncle Bedford show up? Well, they want to sell Thistlehouse and the entire maple syrup legacy that comes with it. Cheryl says she will consider the proposal. But then she freaks out and throws them out of the house when they suggest visiting the chapel where her dead brother is still sitting. She chains it up, so they cannot go inside the chapel. This prompts her extended family to say they will have her declare unfit and then sell everything.

We all know that the chains will get broken and someone is going to find out Cheryl’s secret. As the episode nears an end, Uncle Bedford is found in the chapel. He threatens Cheryl, and Toni knocks him out to protect her lady. Oy vey.

What is it with black hoods?

Dodger says Archie is costing him his workforce. He says he knows that Archie is the guy in the mask who is causing trouble for his group. He lays down a blanket threat to warn them that he’d be seeing them again.

At the end of the episode, Archie goes home to see his black mask stuck to the front door with a knife. He runs in and throws his mom down to the ground just as the front windows get shot out by several rounds of bullets. Next thing we know, Archie has called Veronica’s gangster father, Mr. Lodge, for help. Just as she is telling off her half-sister in a separate scene. Mr. Lodge turns him down and says he is unable to help.

In the last moments of the show, we see Charlie at the prison talking with Chic. He tells him that the plan is going smoothly and everyone is appropriately grateful for his help. Eck.

And then Archie finds Dodger rolled up in a carpet, beaten up badly.

The #Eagles hold an advantage over the #Chiefs in redzone defense, but the Chiefs hold a slight advantage in redzone offense.

Nancy Drew Recap S1E10: The Mark of the Poisoner’s Pearl