So many secrets, Nancy Drew, so many. In one breath, Nancy is mad at her dad for being involved in a secret relationship with officer Karen; in another breath, she is spewing lies left and right to pretty much everyone. She’s breaking into cars, into morgues, and spying on pretty much everyone. I’m all for some crime-solving and investigating, but the 1930’s version of Nancy Drew was sneaky in a good way. There are lots of jump scares in this show, and I will admit that part is pretty awesome. 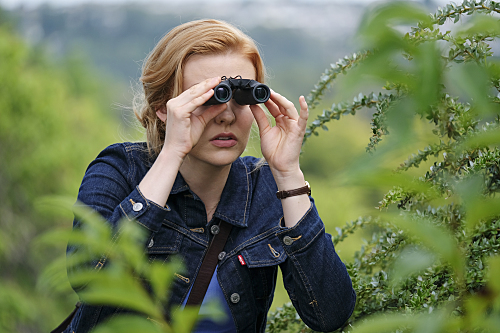 We made it a full three minutes into the episode before the first sex scene. I’m not a prude by any stretch of the imagination, but again, when did this become what it took to sell viewers on Nancy Drew?

So what’s new in episode two?

Nancy develops a plan to break into the mortuary to get a blood sample from Mrs. Tiffany Hudson, our murder victim from last week. She plans out the whole thing and includes the other suspects, her friends from the diner. Stealing card keys and phones seems to be old hat.

Nancy continues to see ghosts, presumably the ghost of Dead Lucy, and she also saw a puddle of blood when she stole the keycard from the mortuary dude. Bess says that Nancy is being haunted as a warning to not get more involved in the Hudson murder. Hmmm, if you recall, Bess is the one who appears to be living in an old van in town, and she somehow ended up with the dead woman’s engagement ring.

Bess and Ace work together to keep the mortuary van from the morgue while Nancy is getting the blood sample. The two of them are hilarious together. If only Bess knew that Ace wasn’t as dumb as he pretended to be, she’d probably be totally into him. Or would she? While they play the part of a couple broken down on the side of the road, we find out that it’s possible Bess is gay, or at least interested in women in one way or another. She gets the phone number of the mortuary van driver’s number, Lisbeth. Once Ace sees this connection between Bess and Lisbeth, he makes an offer to be her “platanchor.” A what not? You read it right, Ace created a new word, one which I absolutely loved, “platanchor,” hahaha a platonic anchor. 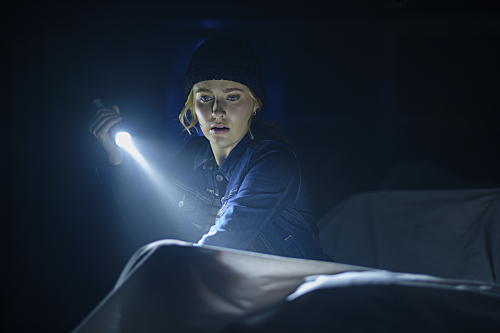 While in the mortuary, Nancy gets the blood sample AND she stumbles upon the evidence box of Lucy Sable. The evidence includes blood from the rock Lucy fell on and strands of hair in an old tiara. The breathy, ghostly voice is what steered her in the direction of the evidence room. Unfortunately, while in there, the alarm goes off. Nancy runs to the exit but is unable to get out. Good old George shows up, but she isn’t incredibly helpful. Nancy hands everything over to George, and then George promptly runs away, leaving Nancy to get arrested.

While Nancy is being booked in jail, she is being lectured by Karen, who tells her that she shouldn’t be getting involved in this investigation. Nancy doesn’t want to hear anything from the woman who is seeing her dad. She does, however, end up getting information from Karen’s computer. Apparently, the police leave everything out in the open when people are sitting near their desks. Nancy ends up getting the phone number of the last person to message with our murder victim Tiffany Hudson.

While Nancy’s dad is talking to her through the jail cell, he provides enough insight into Nick that we learned Nick doesn’t have a motive for killing Tiffany. Remember, last week we found out that Tiffany was the witness who got Nick arrested previously. However, she was kept anonymous, so Nick would never have known that she testified.

During this time in the her cell, Nancy asks her dad about the pink blood-stained dress in the attic trunk. Her dad laughs it off, saying he got it at a thrift store as a prank that he pulled on her mom while she was still alive. He claims he didn’t even know it was still in the house. Nancy pursues further by asking about the trunk itself. Her dad then explains that the creepy attic trunk was something that had been buried by her grandmother back in the day. He shared that it had been filled with fancy family heirlooms. It all sounds plausible, I almost believe him, but it was too easy and doesn’t explain the message Nancy saw behind the wallpaper.

So then Nancy’s dad is able to bail her out of jail. How you ask? Well, it turns out he has taken on a high profile and well-paying client. Yes, good old Ryan Hudson, our widower.

Our show gets bookended by another sex scene, this one between Nick and Nancy after he shows her that he overhauled her mom’s old antique car and was able to get it running again. He even installed a special little spot for her to put her mom’s locket should she ever need to take it off to keep it safe. Weird.

So during this episode, the entire community went out to the bay and put water into a bucket. They then brought their buckets home with the plan on dumping them out at midnight. The lore behind this ridiculous activity is that if it is just water when you dump the bucket, you’re all good. But if you dump your bucket out and it is blood, well then you’re doomed. So, at the end of the episode, everyone kicks over their buckets. Every person just sees water, every person that is except for George. When she kicks her bucket over, she sees blood dripping down the steps. Gew!

While Nick is kicking over his bucket, Nancy calls the number she had found while at the police station, the number of the last person to be in contact with Tiffany Hudson. Nick comes back before anyone answers, and Nancy hangs up the phone.

The episode ends with Nancy’s dad burning the dress that he said was just a prank.

And, surprise, surprise, our friend Nick has a missed call, hence the “temporary pardon” mentioned earlier in this recap.

The Paranoid Style – A Goddamned Impossible Way of Life

From Boy Band to Solo Artist, the Evolution of Harry Styles

If only we were as good at recycling plastic as we...