There’s a storm coming to Horseshoe Bay, and the cops are trying to get Nancy to nark on her boyfriend Nick. Truthfully, he does look suspicious. He was the last person to talk with Tiffany Hudson aside from the 911 operator.

Her dad was last seen trying to get rid of the bloody dress in the bay, but my guess is that the storm will be bringing it back to the surface.

Tiffany’s widowed husband Ryan is now the client of Nancy’s dad, Carson. He says he is sure that his wife died of natural causes. How is that possible when she called 911? Strange.

Nick shows Nancy the clock he found inside her mom’s old car that he fixed up. Nick found out about the clock through text messages from Tiffany.

Some random named Rita comes into the diner looking for a job. She’d odd. And seems super creepy by the way she talks to George. 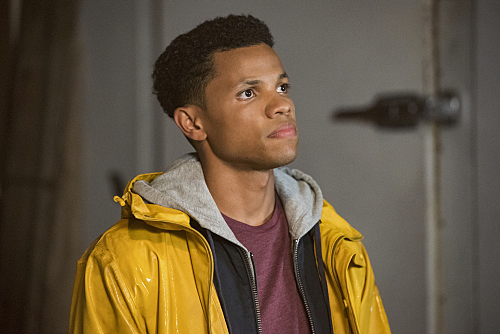 Nancy’s dad found out that Tiffany was turning Lilac Inn into a landmark. When he then discusses this with Ryan, we hear noises that sound like footsteps coming from upstairs in the house. Ryan wanders off to investigate and finds nothing. After more creepy sounds, Ryan tells Carson to take him to the Lilac Inn. He said his wife was super jumpy the last few days before she was killed, and she said someone was watching them. Now we’re all officially even more spooked than we were before the storm started. Partially scared by how hard it is to follow the storyline.

Nancy and Nick are already at the Lilac Inn and are uncovering more pieces to the puzzle. The paintings hanging in the hall are of famous authors from the area in Maine. As they walk into the kitchen, Nick realizes that one of Tiffany’s favorite parts of a book they both read was about cakes in cupboards. He goes over to the cupboards and opens them. Meanwhile, Nancy is saying they need to hide; they can’t be seen there when her father and Ryan walk into the house.

Ryan walks into the house and claims the inn is “unbelievable” before then telling Carson that they could strip it for parts to make some money. Even though he knows Tiffany wanted it to be named a landmark. After the thunder booms and lightning strikes again, Ryan then goes on to say he thinks maybe his wife had been haunted, but still, he keeps yapping about money and won’t tell Carson who he owes. He says it is best to leave the bodies buried, figuratively. This conversation is really all over the place.

Nancy and Nick are in the wine cellar, and he remembers another book that Tiffany had him read, The Cask of Amontillado by Edgar Allan Poe. He starts breaking down a brick wall and finds a safe. Nancy realizes the key to the safe must be inside the clock. The couple finds out how to unlock the clock with a series of times and dates. Of course, like a bull in a china shop, they knock over a wine bottle alerting Carson and Ryan that someone else is in the Inn.

Nancy and Nick race home and the police officer, Karen, is waiting for them. Nancy ends up proving Nick’s innocence by sharing the inscription in one of the books from Tiffany. She explains to Karen that Tiffany visited Nick in jail once every week.

When blood buckets haunt you

Back at The Claw, George is still feeling the “curse” of the bucket of blood. Things have been almost harming her throughout the whole episode. Lamps sparking, arrows falling, you name it and it is happening. Her friends, however, keep saving her, and I think that is really the moral of the story.

Nick explains to The Claw quad that he killed a teammate named Austin from his football team. That is why he went to jail, but it sounds like he was defending a girl from being assaulted. Bess says, “What’s important is who you are, not what you did.” So sweet, Bess.

As George is cleaning up in the restaurant, she sees a newspaper clipping which shows a picture of Rita. Apparently, Rita had been decapitated in a boating accident. Friends, the girl was a freaking ghost the whole time! Now it makes sense why she disappeared when George was again nearly killed by something in the diner.

Nick and Nancy open the secret box and find untraceable bearer bonds, almost $5 million. Tiffany wanted Nick to have a fresh start, and he is afraid that people will think he killed her to get to the money. Nancy says he should keep them.

What the storm uncovers

Ace texts Nancy asking for help. He leads her to where Bess is staying in her old van. It was pretty much flooded due to the storm. Nancy offers for Bess to come and stay at her house. Once she agrees, she begins packing up a few things to bring, and the missing engagement ring falls to the floor. Nancy picks it up and hides it. I hope she gives it back because if the police find it on her, she will be arrested for the murder of Tiffany Hudson.

Carson comes home and begins walking up the stairs when water begins to drip on him. Viewers see the ghost of Lucy hovering above him, but when he looks up there is nothing there.

Creepy, creepy! And guess what, no sex scene in this episode, just innuendo. High fives CW, this show doesn’t need that; it’s already filled with intensity via mystery.

How Mask of the Phantasm & Batman: Year One Set Up...