Everything seems to move in slow motion during an accident.

If you recall, at the end of the last episode Nancy was asking her father if he killed Lucy Sable. Nick happens upon an accident scene and realizes that it is the Jeep that Laura and Ace had been in earlier.

“I’m not some kind of hit man,” Nancy’s dad yells at her in response to her question about Lucy. While they are in a heated argument, George knocks at the front door and lets them know that there was an accident and that Ace is involved.

While the girls wait in the hospital, Nancy goes through Ace’s phone and listens to the recording he had been making when they were in an accident. The recording makes it clear that someone had tampered with Laura Tandy’s car. Nick can find out the truth about this because he is the town mechanic, so he finds a way to get to the vehicle’s records and prints a report for Nancy.

The chief of police, McGinnis, is there at the hospital and he wanders the halls after seeing what appeared to be the ghost of Ace. Interesting, as perhaps Nancy and George’s mom are not the only people seeing things. He does magic voodoo in the hospital, then he figures out that the crew at The Claw has also been doing some sort of spiritual tampering. He barges in and lets them know that Ace’s spirit is roaming the halls. He’s not dead; he’s lost and scared due to the trauma of the crash. If he is lost in the spirit world then he is trapped in the moment of his greatest fear.

So is Horseshoe Bay some sort of Hellmouth like Sunnydale was in  during the Buffy the Vampire Slayer series? Because that would be kind of awesome.

The chief of police is part of a tribe and is ready to do some sort of ritual to try and get Ace to come back to them in the real world. The scene is a little bit unnerving. George gets pulled into another realm and begins calling for Ace. She says, “McGinnis brought a pipe you’d like.” Instead of finding Ace, she sees random spirits and lots of black clouds. This means there has been conflict and unresolved emotions. McGinnis tells her to focus on Ace and stay calm. Of course, she doesn’t stay calm. She runs and panics which then leaves her vulnerable to be grabbed by the less than kind ghosties wandering around Horseshoe Bay. 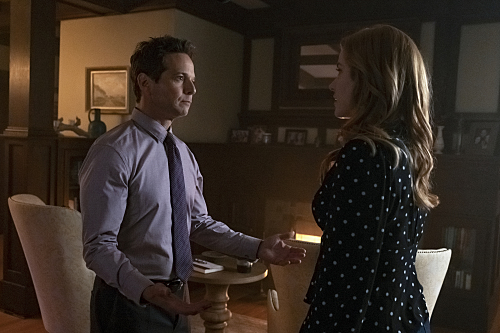 The argument between Nancy and her dad spills over into this séance ritual. The mystical ceremony should be taken seriously. Carson Drew said that he had been looking for Lucy the night she was murdered. He saw her dead, but he didn’t kill her, and that she had already been pushed. He says he will tell her every detail, but she needs to choose to believe him. She agrees, but says that they need to save Ace and George first.

George is still looking for Ace. Instead, she finds Lucy Sable’s dress burning and the message about her drowning. McGuiness is able to rein her back in and she begins to remember things about Ace’s past. She is taken back to the night that his Dad was in an accident during a snowstorm. George finds Ace as a child, and she picks him up and lets him know that she can take him home. He hands her the bear-shaped stone that McGuiness had given him all those years ago. What began as unnerving ended up being kind of sweet. Aw George! She has a tough exterior, but she’s a sensitive; not so unlike her mother after all.

Bess confronts Lisbeth and winds up finding out that she is an undercover police officer. She said that the police believe the Hudson’s have someone in the police force working for them. This matches up with what George determines to be the case while looking for Ace’s spirit. He provides a clue for her: leather boots with brass eyelets. They were the last things he saw after the Jeep flipped. Turns out that a dirty cop tampered with Laura Tandy’s car. Not cool. Nancy goes to Chief McGinnis with this information and while she is in his office the dirty cop walks in, boots and all. In the blink of an eye Officer Rawley goes down all thanks to the fake report he turns in showing that the car was not tampered with, as Nancy holds the real report showing the truth.

Lisbeth punches Nancy in the face, this appears to be a ploy so that Lisbeth can show the Hudson family that she is truly loyal to them. Otherwise, she’d lose her undercover job.

Nancy finds out that her dad did find the dress of Lucy Sable, and that he took it and hid it. He explains that he and her Mom stayed in Europe for the first year of her life. He was trying to steer clear of the Hudson’s.

The blinking smoking dragon game has some sort of electrical shortage while Ted is playing at The Claw in George’s office. A spirit comes to the door and when George goes to find Ted and bring her home, she’s gone.

And the next mystery begins.

Suit Up! The Clone Wars Together Again Episode Review

MasterChef returns on Wednesday, a tradition unlike any other…