The episode opens with Nancy preparing for her father’s evidentiary hearing. Poor Nancy has been doing everything in her power to find evidence that will exonerate her father, even as he continues to tell her not to do so. Why is he so adamant? He knows that Nancy lives for mystery solving, why wouldn’t she put every effort into trying and helping him.

Lucy Sable is haunting Nancy, again, and this time she is making it seem like Nancy’s Mom had something to do with her murder. But that can’t be right, it would be so wrong to blame her dead mother. This makes Nancy want the DNA evidence from the bones they found last week even more so. Additionally, she asks her forensic friend to run the DNA on the female hair sample that had been found with the murder weapon. I still believe it will be found to be Ryan’s Mom’s hair.

Nancy and Ryan do some heart-to-heart talking and more of the truth comes out. He shares that his Dad was the person who threatened Lucy because he felt she wasn’t good enough for his son. Yes, yes, I know the writers want us to think that Ryan’s Dad killed Lucy, but that would be too easy. Anyway, Ryan’s Dad lets them know that he did see Lucy the night she died, but he last saw her with Karen. Ok, so we know Karen didn’t kill her best friend, especially since she is already in a world of trouble, so it has to be someone else. Karen does, however, let Ryan and Nancy know about a missing diary.

Remember the first episode when we found out that Lucy’s bloody dress was in Nancy’s attic? Nancy also found words to the creepy Lucy Sable nursery rhyme written on the walls of the attic. Nancy and Ryan head to Lucy’s abandoned house to find the diary. When they enter, they observe a bee’s nest and both express concern because they are allergic. They find writing on the walls that call back to the writing Nancy found in the walls of her attic. She realizes the diary must be inside the wall.

Sure enough, Nancy and Ryan find the diary, and boy does it hold a crazy surprise!

It was a suicide, not nobody was found 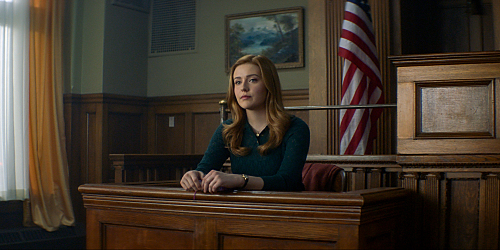 She rushes to the courthouse, where she reads the diary out loud for everyone assembled. It turns out that after the extreme bullying she suffered Lucy planned to commit suicide at the cliff over Horseshoe Bay. All this time Lucy was haunting Nancy for a very specific reason.

The forensics team confirms Lucy’s handwriting and the authenticity of the diary, ruling Lucy’s death a suicide and clearing Carson.  Nancy heads back to The Claw, where John Sanders tells Nancy the results of the testing are in.

Nancy asks her Dad to tell him what really happened because she knows that both he and her Mom were there on the cliff when Lucy died.  He says that the night of the suicide, Kate Drew got a distressed call from Lucy. Turns out that Lucy had been pregnant with Ryan’s baby and had hidden it all this time. She gave birth on the bluff and the Drews’ cut the umbilical cord with Kate’s knife as they tried to talk Lucy down. Lucy handed the baby to them. But they turned their back for a moment and Lucy was gone.

This means that Nancy is not biologically a “Drew.” Instead, she is a Hudson!

Ryan doesn’t know Lucy had his baby, and certainly not that that baby is Nancy.

A new detective is in town and found a piece of Lucy’s skull at The Claw.

To catch the next episode, tune in on the CW April 8 at 9 p.m. or check back here for the recap.

When did Nancy Drew become so edgy?