There is no soft intro to the latest Nancy Drew episode.

We ended last week’s episode in a garage with a missing body. Joshua, who we learned had been the one who killed Tiffany with poison, though the target was Ryan, had been electrocuted. Somehow he got himself down off the hook where he was hanging and walked off. His body is now missing and everyone is up in arms because a “murderer” is on the loose.

Owen shows up at the police station because he was worried about Nancy after hearing she was nearly killed. He ends up tagging along on her investigation of someone named Chad Vogel. No surprise when he ends up being a douche. He’s a friend of Ryan’s from back in the day. They went to the same boarding school and this Vogel character fills in some missing details about Ryan and Lucy. Enough to possibly shake Ryan’s alibi for the night Lucy was killed, but I still believe it was Ryan’s Mom. No way Ryan pushed Lucy off the cliff at Horseshoe Bay. No Way.

This town sure does have an awful lot of spooky legends. This week we learn about “Aglaeca” an evil spirit that drove a ship off course which then made it the first ship to ever visit Horseshoe Bay. Urban legend says that one day a year, on Harbor Day, you can look into the mirror, and you can ask the Aglaeca for something. If you get your wish, there is one drawback, your eyes bleed.

As Nancy and Owen are leaving Chad Vogel, she receives a Lucy vision which makes her believe that Lucy wants her to dig up her dead body. The kicker… Lucy’s eyes are bleeding. Hmmm, this begs the questions, what wish came true for Lucy that then lead to her death?

I just feel this needs its own headline. Ace’s Dad plays a role in this episode and I love it. The fact that many of these characters are now using American Sign Language makes me so happy. This is something we truly need to see more of in society and I love that The CW is embracing deafness and making it a part of the story.

The poison vials were swapped

WHAT!? I knew it! Detective Karen, that no-good dirty cop, I knew she couldn’t be trusted from the very beginning. Nancy finds out that Karen swapped out a vial of poison from police evidence shortly before Tiffany was murdered. Let me just take this moment to remind you of an episode from early October 2019 when I pegged Karen as a liar. Yeah, here’s a link to that enlightening post.

Anyway, Karen gave the vial of poison to Joshua, the one which killed Tiffany Hudson, but had been meant to kill Ryan Hudson. To prove the vial currently in evidence is fake, I thought Nancy would drink it, but instead Ace drank it. He confirms that it is indeed a fake, it is just water.

Karen says she wanted Ryan dead because she wanted justice for her best friend, Lucy. She claims she saw Ryan preying upon another innocent young woman, George, and she couldn’t let that happen again. Oh well, Karen, you messed up, you’re done. Nancy’s final burn, “I’m just glad my Mom’s not around to see who you’ve become.”

Owen, George, and Bess are busy at the Historical Society looking for clues. George finds a book that has information about this mysterious evil presence, the “Algaeca.”

“When the first women arrived in Horseshoe Bay, they started weaving stories about a presence haunting the waters. Once a year, on Harbor Day, they would make requests of this mysterious entity they called the Aglaeca” Step into the water. Let your heart’s desire call her. Blood payment you will need, wrapped in chains from the sea”. “Summon your courage and venture near, to a vision then appear”. “It’s the toll you pay, if you dare. If unwilling, then you must beware”. 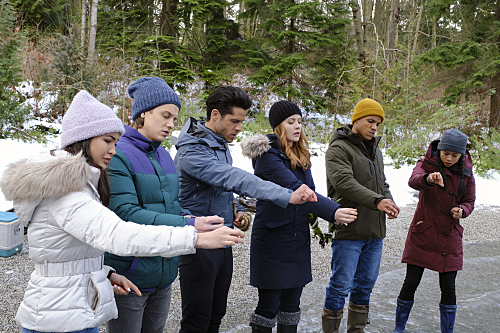 At low tide, six people choose to call out to this evil spirit: Nancy, Nick, Owen, Ace, George and Bess. They prick their finger, droplets of blood fall into the ocean and Nancy makes her wish. “Aglaeca, I call out to you for the lost bones of Lucy Sable.” No surprise when this works, it seems each time they reach out to the otherworld it ends up working. Nancy’s eyes bleed, but worse than that is that Owen’s hands and arm start to bleed.  George picks up the wreath and rips it apart which seems to save Owen. He almost dies as payment to the spirit who has shown the group Lucy’s bones.

It may seem like they got out of this one safely, but I don’t feel so confident. Pretty sure Owen is doomed, if not him then George, because she broke the toll payment.

The episode ends with Owen and Nancy making out once she gets him back to his place. Clothes come off quickly, I’m sure it was just adrenaline from the bleeding eyes and such. Then Nick confirms hotels are still booked and he is going to be sleeping at The Claw again. George comes to the rescue and offers a spot on her sofa.

When Nancy returns home she starts choking. She pulls an enormous string out of her mouth and it ends up being the wreath that George tore into pieces to save Owen.

A Pod Has No Name: Edgedancer Part I