In Nancy’s alternate reality, George is peppy and loud. Both of her parents are alive. Her Dad introduces her to Nick and wants them to meet. Nancy is at The Claw and the smoke alarm goes off, but there is no smoke. Bess looks like a hippie, she has curly hair and is super chill. She realizes that everything is super perfect and that it can’t possibly be real. Seems as though even in dreamland, Nancy can’t escape her investigative personality.

We see everyone at Larkspur Lane standing outside as the place is evacuated. Nick and George know that Nancy is still inside and they need to find a way to get in. We know she has passed out in “the whisper box room” with the creepy roaches. 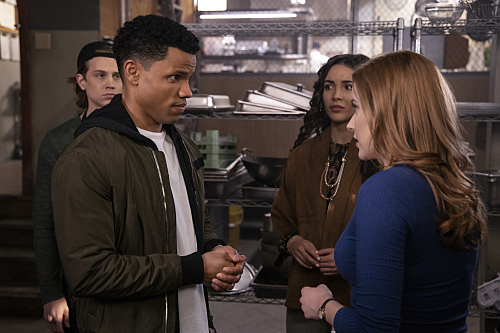 Jumping back into an alternate reality, Nancy and Nick go to his new home. This happens to be in the same location as the sanitarium in her real life. Cue the Twilight music 🙂 When they check out the house, they find a room in the attic and it has a door that matches the room in real life. However, they do not have a key. Nick tells Nancy that Ryan Hudson is the one who sold her that door.

The fake orderly tries to help George and Nick get back into the building. They call Ace to track down Father Chain and get holy water. They go to find him and he creepily climbs into the back of their vehicle, takes a package from them, and then gives them water. The fake orderly patient is able to steal keys to get them inside and no one sees him, George, Nick, Ace or Bess walk inside. They find Nancy and she looks pretty awful. She is pale and sweaty and foaming at the mouth. This is not looking good for our girl.

Find the belly of the hollow oak and walk 12 steps. I don’t know what all of the clues were that Ryan spouted out, but he explained that alternate reality Nancy has the key to the mystery door. Nancy starts ordering people around, just like in real life. There is some kind of weird flower anchor symbol on the floor.

Nancy’s Mom, Kate, calls the doctor about her test results. Nancy gets to sit there with her and listen to the call where perfect world doctors tell her that everything is fine. Wow. If only this were truly the case.

Nick comes over and it starts storming. He and Nancy can’t go out looking for the mystery key in the storm, so they have a moment. Remember this is the fake life, so it’s perfect and Nick says all the right things. Nancy tells him that she has missed him, but she misses Nick in her real-life reality. I think she is just now realizing it. They start making out.

Nancy is making out with Nick in the fake world and starts gasping for air in real life. George and Nick run to look for a crash cart. Ace and Bess talk to Nancy and ask her to wake up, but she’s getting ready to knock boots with Nick in the alternate reality. In real life, Bess tells Nancy that she is running out of time, and in the alternate reality, that same message falls into the room via a blue piece of paper.

In the cemetery, The Claw crew looks for the angel, takes 12 steps, finds the belly of an oak tree and all that fun stuff. Fog rolls in and birds make loud noises and a huge grave marker appears. Inside a hollow oak, visible through the wings of the angel, Nancy finds a key. This is when I literally jump out of my own skin. Hands try to pull Nancy through the hollow of the oak tree and the weird symbol appears again.

Nancy says that in her reality, all of her friends are not happy and they do not always get along. So making the decision to go back is not easy. She tells Nick she wishes she had the courage to fight for them. They kiss and the mystery door opens. Inside is a bare room and Nancy starts to panic, she thought that had been the answer to getting her home. In all honesty, I did too. I thought we’d cut straight to real life and she would wake up.

Instead, we find Nancy trying to organize the blue pieces of paper which have been falling into her life in the fake world. Her Mom is talking with her and she starts to put two and two together. It turns out that in real life, her Mom wrote her a letter and put it in a blue envelope.

Nancy’s nose is bleeding. Her friends are fighting over what they should do to save her.

Nancy finds the letter from her Mom and then attempts to locate a swan constellation in glow stars. Her Mom tells her that she doesn’t have to lose her if she chooses to stay. Nancy says she has to go back because her Mom always told her to seek out the truth. She has to say goodbye to her Mom, again. When she does, the door opens to real life.

Nancy wakes up and asks if her friends are real. George responds by saying, “what a dumbass question is that?” That snarky response lets Nancy know she has returned to real life. Back at the real The Claw diner Nancy seems a bit off. She tells the crew about how they were all still friends but were also very different. The tension between Nick and Nancy is palatable.

When Nancy gets home she sees her Dad. He is there, with a fancy glowing ankle bracelet, because he is under house arrest. He talks about how he should do some volunteer work and Nancy suggests the Historical Society. Apparently, he did work for them once upon a time on a volunteer basis and he pulls up a photo on his phone. In the photo Nancy pieces together the symbol she had been seeing in her alternate reality.

Nancy goes to visit the Historical Society and she sees the scary ghost-like curtain which had been following her around in an alternate reality. It is also the last thing she saw before passing out in the whisper box room. The card key that Nancy found at Larkspur Lane is for a box that is at the Historical Society. Wait, what!? This isn’t a bank. Goodness. It gets better, my friends, because this box belongs to the late Tiffany Hudson.

The woman at the Historical Society who helps Nancy explains that she has lockboxes for people who have come to her at times. She calls herself a “keeper of sorts.” Inside Tiffany’s lockbox is an SD card. There is a movie, a confession of sorts, on the card. Tiffany is recorded saying that she is being haunted because of something she found out. Nancy sees dead Lucy in the movie. The woman then tells Nancy that someone did not want Tiffany to solve Lucy Sable’s murder.

And then the episode ends.

Suit Up! Trailer Reaction: The Voyage of Doctor Dolittle