This week’s episode of Nancy Drew opens up intensely by immediately landing us inside one of Nancy’s dreams. Let me tell you, friends, Nancy has some wickedly vivid dreams. Goodness, talk about dealing with conflicting feelings through sleep. Obviously, she is attracted to Owen, but Nick has been good to her and they have been through a lot together. It makes sense that both men end up starring in her dreamscapes. Yet, even in her subconscious, Dead Lucy has other plans for what needs to be deciphered.

At the end of Nancy’s sexy dream, Dead Lucy chooses to wake her up with a scream. She sends her yet another clue from beyond the grave, and this time Nancy discovers boxes of files under the stairs of her own home. One of those files leads Nancy to discover that her Mom had been Lucy Sable’s guidance counselor. Oooo and the plot thickens! I am not shocked to see that someone tore the confidential papers out of the now empty folder. 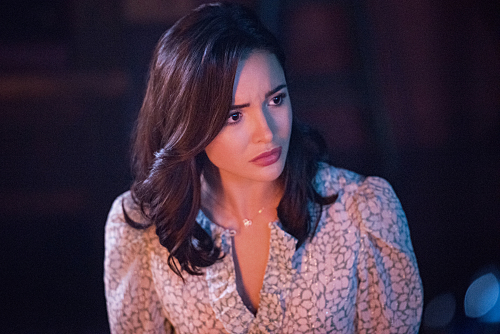 Yes, so Bess is quickly becoming one of my favorite Nancy Drew characters. Bess is so quirky and flighty, and now that we’re learning more about her, I have to admit I really like her storyline. I mean I couldn’t care less if she is part of the Marvin bloodline or not, but she’s so anxious and cute about it! Plus, how can you not love her friendship with Ace- but we’ve discussed that in previous recaps and he isn’t in his episode.

In a moment of truth telling, Bess lets her cop girlfriend know that when she gets anxious she steals things. Probably not the best admission, but she wants to tell Lisbeth the truth and I’m proud of her for doing so. Lisbeth seems to be super understanding; she lets Bess now that she accepts the authentic version of herself. I’ll admit that it’s freaking me out to hear Bess speaking with a British accent, it’s weird.

When Nancy goes to see the Hudson family, she basically barges into Mr. Everett Hudson’s office telling him that they both know her father didn’t murder Lucy Sable. She says he has the pull to get her father out of jail, but she knows he will want something in return. Surprise, surprise, he wants help with Owen Marvin and the mystery of the Bonny Scot ship.

As Nancy gets ready to leave the Hudson residence, Dead Lucy makes another appearance and leads her upstairs. Here we see an enormous painting of the Hudson family and there appears to be blood dripping from the bottom of it. What does it all mean, Lucy!? Why all the riddles? Goodness, can’t ghosts be more specific?

Why is Owen ignoring Nancy’s call!? Bashiir. Owen introduces Nancy and Bess to the sole survivor of the Bonny Scot. Bashiir tells them about the night the ship sank. When the bomb exploded on the ship, he had snuck up to the top to look at the stars. HIs guilt has been crushing him for years, because he was the only one to escape. The reason Bashiir never came forward to tell his story, because he is an undocumented person from Somalia. He says he isn’t willing to come forward, because he has made a life for himself fishing and he doesn’t want to have to leave.

The winds of change

The Bayside Claw is going up in the market. What will this mean for George, I mean she runs The Claw, it’s like her home? Plus, this is where the gang all gets together and does their best brainstorming. Every teen-based primetime drama needs a brainstorm location, and we all know that diners are the best place.

We also learn that there are no more court-ordered counsel sessions for Nick. What will he do now that he can leave Horseshoe Bay? Will he stay or will he go? Especially since I still think he is developing feelings for George, and apparently her tuna melts. When George tells Nick that he will help her save The Claw, it just solidifies my assumption. Then George lets Nick carve his name into the bottom of a table and now we know she likes him, too. Ohh love stories with complicated characters, this is CW gold.

Do things the Marvin Way

Since the DNA results came back, it seems that Bess is being accepted into the Marvin family with very little hesitation. She meets with her Aunt Diana and is already getting roped into the family business. Apparently, there is a precious mineral, something or other, that the family would like to get involved in, and Aunt Diana thinks Bess will be able to make it happen. The conversation gets weird though when she brings up Bess’s girlfriend Lisbeth and says that it’s okay to “get on” with drivers or bodyguards or pool boys because her mother certainly did. Oooo what a slap to the face, that was so rude lady!

Caught up in a haunting

Nancy realizes that Bashiir is being haunted when she tells Nick about seeing the saltwater oozing from the walls. She and Nick rush back to Bashiir’s apartment and water is rushing out from under the door. They break their way in, after hearing him scream, they find that they are inside the Bonny Scot. It appears that Nancy and Nick are seeing what Bashiir witnessed the night that the ship sank.

The Roman burial coins which were melted during the seance seem to have woken up the ghosts. For the last three weeks, Bashiir has gone through this nighttime haunting ritual of hearing the crew scream for help. With this happening, Nancy is able to convince Bashiir that helping her bring down the Hudsons would help him silence the ghosts.

Nancy is such a party crasher

Bess and Owen have dinner with their Aunt Diana and the Hudson family. Nancy crashes the party, lets everyone know that Owen found a survivor of the Bonny Scot and then all the skeletons come out of the closet.

Why Everett Hudson believes that Nancy would be willing to throw Owen under the bus is beyond me. Somehow within two minutes of time she is able to secure $2 million for Bashiir to keep his mouth shut and relocate him to a place where the Marvin family will not be able to find him. You see, the Marvin family lost a loved one when the Bonny Scot sank, someone named Sebastian. The same Sebastian that Everett Hudson’s wife was having an affair with. Yes, the same affair that Lucy Sable found out about before she was murdered.

Holy mackenzie, could the whiplash of this show finally be making sense? Are the pieces to this mystery all finally coming together? No, it can’t be, it’s only January.

We all knew Nancy had her own plan. Still, when Lisbeth came in wearing her cop hat instead of her driver hat, that was pretty stellar. She was able to arrest Everett Hudson for murder and insurance fraud because the $2 million didn’t go into Bashiir’s bank account, it went to the police. Ooooo! Boom! Drop the mic Nancy and way to go Lisbeth!

While Everett is being taken away by the police, Nancy runs upstairs to the previously bleeding family portrait and she finds Lucy Sable’s missing guidance file.

And I know who made the call to put an offer on The Claw. It is so obvious! Now that Nick’s court-ordered stuff is over with, he can get on with his life. He’s going to invest in The Claw. He’s going to save it for George.

So psyched that I was right, by the way. Nick says he will split the restaurant with George. She knows how to run the place and he has the means to keep it afloat until they can start turning a profit.

Ooo she is a wicked one

Wicked evil Celia uses a burner phone to ask someone to kill Carson Drew in jail and also send a “message” to Nancy. So basically, this woman has an affair with Sebastian Marvin. Her husband finds out and blows up Sebastian’s ship, killing him and 11 other people. Yet she still feels the need to try and protect her husband, why? These people are insane, but now we know what to expect for next week.