Along the lines of things you never thought you’d write about might include a song about a zombie apocalypse written by a supermodel.

Raise your hand if you know who Tom Payne is and where you have seen him? Well, he’s an actor best known for his role in The Walking Dead. He played Paul Rovia, better known as Jesus, from 2016 to 2019. Now, raise your hand if you know his wifey? Isn’t that what you call someone who you are engaged to forever, but never actually get married? I don’t know, it just seems that way in my circle of people. So his wifey is Jen Åkerman. She is a Swedish model who moved to California to become an actress, but ended up being recruited to New York by a variety of agencies who liked her style. You may have seen her in campaigns for The Gap, American Apparel, and Forever 21. 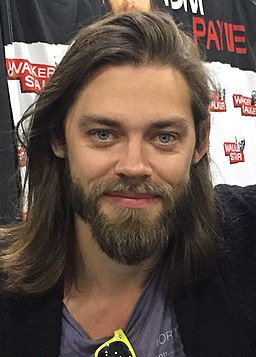 So here we have Tom and Jennifer who have been engaged since 2013, and they’re both doing their own thing, living the dream. Then I guess they woke up one day and roll over to face each other and they say, “Hey bae, you know what we should do in our already busy schedule? We should totally sing together.”

Okay, rewind, I haven’t been 100% transparent here. See, Jen has been trying to break out into music for a few years now. She began with a band called Bella Tech, and then she has her own band, Bloke & Bird. In Bloke & Bird Jen fancies herself the bird, but the bloke is not Tom. Instead, it is Lorenzo Jansson Kilman. Yes, you read his name correctly. Jansson. Yes, that is a Swedish name. They apparently met in 2010 and started a band called Jaxx, but I guess that didn’t go the way they hoped, so they changed their name a year later.

So now we have two people from Sweden working together, and we have Tom. In case you are interested, Tom is from England. Anyway, the big question here is how does Jen have time for MORE music, when she is, or has been, a member of a band for the last nine years and I haven’t heard of any of them? And, honestly, why do I even care? I’ll tell you why, because I just learned about Jen’s upcoming album “Till Death Do Us Part (part I) EP” which will hit the digital shelves on September 13, 2019. And this album isn’t with ANY of the bands I just mentioned! This album is entirely self-produced under the performer name of Final Child and the track I heard was a duet between Jen and Tom called “Afterlife.”

Here is where things come full circle and the pieces begin to fall into place. So, let’s think about where we are: we have the Swedish supermodel Jen who is engaged to the English actor Tom Payne. Tom Payne starred on The Walking Dead for a few years, and that show is about zombies. The first single released from Jen’s EP is called “Afterlife,” and it is a duet between her and Tom Payne singing about staying together in the event of an apocalypse. BOOM! It semi-makes sense now, doesn’t it? Haha.

Why did Jen, aka Final Child, aka Bird, aka Bella Tech, aka Jaxx, decide to produce a song with her fiancé about surviving an apocalypse?  “Sometimes I look at the afterlife as a relief,” she explains. “I have friends of mine that have, unfortunately, killed themselves or have friends that have passed away. And you still have to celebrate the fact that we are here, and we have been here.”

What became of all the names and band hopping? Jen had a vision for what she wanted her music to be, and it just wasn’t quite right. However, she didn’t give up, she worked her tail off to make this album happen. She went from singing, to learning how to play guitar and how to produce music, and then she became an independent, manager-free artist. That is quite impressive, and it all started with dating a Walking Dead cast member.

The EP will consist of seven unique, moody tracks that are awesome on so many levels. So, make sure to look for it in September 2019. Listen to her other music on Spotify.

Where do you go when you’re running from yourself? The Goo...